Local chef personalizes meals for you and yours 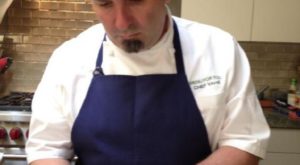 Vahé Mekhitarian, of Wilmette, owns Menu For You, a business that creates weekly home meals in customers homes. Photo Submitted

When Chef Vahé Mekhitarian wanted to create a food business, he strayed away from the common sit-down restaurant and took his kitchen on the road.
Wilmette’s Mekhitarian runs his business, called Menu for You, out of his customers’ homes, rather than owning a brick and mortar restaurant. This way, families can sit down and enjoy a meal together in their own home.
Menu for You is meant to provide extra time for families to be together, since they won’t need to dedicate time every day to preparing and cooking meals.
The business also frees up time in Mekhitarian’s schedule for his own family — a win-win for both parties, he said.
“My philosophy is dining geared more toward the week,” Mekhitarian said. “I didn’t want to manage 10 different chefs. This way, I work directly with my clients and cook.”
Every Monday, Tuesday, Thursday and Friday, Mekhitarian travels to his clients’ homes in the North Shore and northern suburbs.
Before he starts cooking, however, Mekhitarian sits down with the client and discusses what his or her needs are. Clients also fill out a food questionnaire, dietary needs and specific likes and dislikes.
“A lot of people have hypertensions or some clients have low blood pressure; it really varies from client to client,” he said.
With the client’s direction, Mekhitarian puts an organic, healthier spin on the food, he said, with a personal home meal schedule, which includes three meals that can be later heated at the appropriate time.
The three meals are prepared by Mekhitarian during the day he’s scheduled to be there cooking.
“I’m usually in the house by 9 a.m. and out by 4 or 5 p.m.,” he said while describing the routine of his two-year-old business.
When he arrives to the home on the cooking day, he brings in kitchen equipment and groceries to prepare entrees, soups and sides. The groceries are purchased by Mekhitarian the same day as his cooking.
Ingredients are bought from various local markets, including Whole Foods and Wilmette’s Burhop’s Fish and Seafood.
“I cook [ingredients] right [away] and everything is fresh,” he said. “Nothing is prepared outside of the home. I do all the cooking and clean up so [the kitchen] is exactly how they left it.”
The three meals are packaged according to how the client likes, some left out for the night of, others frozen to serve as a back-up meal. Heating directions are printed by Mekhitarian so clients know how to prepare the entrees.
Mekhitarian’s clients are weekly, bi-monthly or once a quarter.
Before he began Menu for You, Mekhitarian was a professional chef for 10 years. He received his bachelor’s from DePaul and completed an associate’s degree in culinary art from Cooking and Hospitality Institute of Chicago, now-known as Le Cordon Bleu.
– See more at: http://www.wilmettebeacon.com/local-chef-personalizes-meals-you-and-yours#sthash.5MoBaYuz.dpuf